"...there are lots of ways to be successful...I think the key is #1 to have an approach well-thought-out, built-up hopefully over some years or decades. Hold it strongly...be willing and able to hold it through the periods when it's not working because nothing works in every market, nothing works in every stage of the cycle, and nothing works every year, even if you are in an up cycle...No approach is going to work all the time..."

We believe that in order to be successful investors and advisors, we must subscribe to a fundamentally sound investment philosophy, implement it effectively and remain committed to its tenets, especially in the face of adverse conditions. Equally important is a commitment on the part of clients.

Of all the investing approaches that we have considered, there is one style that resonates with us. It is the business-like approach introduced by Ben Graham in the early 1930s and executed with superior results by Warren Buffett. It is succinctly described below in an interview Mr. Buffett did in the throes of the severe 2008-2009 stock market sell-off:

Q: "As you look back over the last three decades, what would you say is the most important lesson that you've learned about investing?" 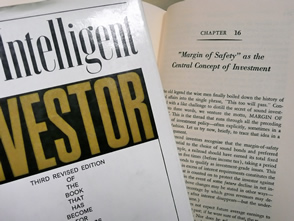 When we were first introduced to this approach, it grabbed us immediately. As Mr. Buffett has metaphorically described, it was like an inoculation.

We would encourage all investors to read Graham's book. The two most important chapters teach investors how to deal with fluctuations in the stock market and the importance of investing with a "margin of safety".

Please visit the Disclosures section of this website to review Important Disclosure Information.